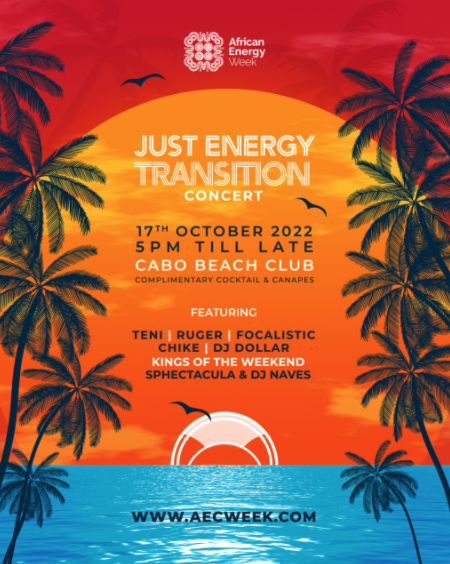 Top Performers for the Just Energy Transition Concert Ahead of African Energy Week on 17 October at the Cabo Beach Club in Cape Town.

With the Just Energy Transition Concert set to take place on the eve of the continent’s premier energy event, African Energy Week 2022, the African Energy Chamber is proud to announce the concert’s performance lineup.

The African Energy Chamber (AEC) is proud to announce the artist lineup for its Just Energy Transition Concert – set to take place this year on 17 October at the Cabo Beach Club in Cape Town. The concert will officially be headlined by Teni; Ruger; Focalistic; Chike; DJ Dollar; Kings of the Weekend; Sphectacula; and DJ Waves, representing one of Cape Town’s most exciting Afrobeats and Amapiano festivals this year.

Serving as a prelude to the continent’s premier event for the energy sector, African Energy Week (AEW) 2022 – taking place at the V&A Waterfront in Cape Town from October 18-21 – the Just Energy Transition Concert is centered around integrating music and culture with energy dialogue, with the concert’s exciting artist lineup driving new interest in the already-attractive event. Building on AEW 2022’s narrative to make energy poverty history by 2030, the concert represents a unique platform where energy stakeholders and music-lovers alike can network and engage on energy-related matters. By integrating one of the continent’s fastest-growing industries – music and culture – with a sector considered the backbone of the economy – energy – the Just Energy Transition Concert represents a first of its kind.

With over 600 million people currently without access to electricity in Africa and over 900 million people without access to clean cooking solutions, the need to drive dialogue around making energy poverty history has never been more prevalent. For AEW 2022, driving the need for a just energy transition in Africa represents a key theme, with the AEC firmly committed to promoting an Africa-centric approach to the transition, an approach in which every resource and every stakeholder is included. Leaning on this narrative, the Just Energy Transition Concert, taking place on the eve of the event itself, further consolidated this narrative while driving investment, development and wider participation across the energy industry.

“Representing some of the top artists and performers within the Afrobeats and Amapiano genres, the Just Energy Transition Concert lineup speaks to the caliber of both the concert and AEW 2022 itself as the premier forums where stakeholders can network, engage in energy-related dialogue, while enjoying great music and entertainment. The time to take action towards making energy poverty history is now and forums such as AEW 2022, and even the Just Energy Transition Concert, will be key. We look forward to welcoming everyone to the concert and to AEW 2022, where we will drive the narrative of a just energy transition in Africa,” states NJ Ayuk, Executive Chairman of the AEC.

AEW 2022 is the AEC’s annual conference, exhibition and networking event. AEW 2022 unites African energy stakeholders with investors and international partners to drive industry growth and development, and promote Africa as the destination for energy investments. Key organizations such as the African Petroleum Producers Organization, as well as African heavyweights including Equatorial Guinea and Nigeria, have partnered with AEW, strengthening the role that the event will play in Africa’s energy future.